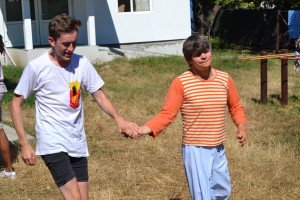 I’ve returned home I have found readjusting back to normality anything but easy. The two months spent away were so busy and productive that you find yourself falling into a bubble of what you believe a normal day should consist of. Wake up, build a path, visit a Roma gypsy community, run a kids club, host a disco at Casa Lumina, etc. The list goes on! I have found returning back from mission hard as you find that you have a lot of free time and a desire to continue helping people and sharing God’s love although the way in which you must go about it becomes very different. Being disconnected from the place in which I could carry out this work led to me feeling low and frustrated at times.

A volunteer (and all-round great guy) named Murray who was a member of the Comberton Baptist team, recently shared a story that helped inspire me. He told me of how when he was waiting for a plane ride home back to Scotland he got talking to a guy at an airport. They chatted and spent time with each other, and when it came to time to say goodbye Murray shared his faith with him. Wow.

Last Saturday I met up with some friends for a drink at the pub, once finished I went to McDonald’s to get some fuel for the journey home. I began walking down Colchester high street when I walked past a homeless guy asking for spare change and I ignored his plea for help and walked straight past him. A few steps later I felt an overpowering urge to turn around and share my McDonald’s with the man I had just past. I don’t know why I did because I love chicken nuggets and could have quite easily eaten the box of 20! However before I knew it I was having a chicken nugget picnic with this man on the corner of the street. We got talking and he told me about his life and how he had fallen into his current situation. I realised that he was a normal guy just like me who enjoyed watching football and fanaticising about cars we knew we could never afford. He did not deserve to be in his situation, as quite often we can be guilty of letting ourselves belief.

When I felt it was time to go, again I felt something inside of me, which I believe to be God telling me to share my faith. It seemed like a scary thing to do at the time but I said a quick prayer and was reminded about Murray’s story and realised that if I stepped out in faith God would not let me down. So I gave my new friend my band that I had been wearing which has on it the four points, something which the Comberton Baptist team introduced me to. God loves us, we have all sinned, Jesus died for me and I have to decide what to do next. 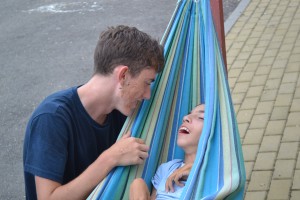 Steve in one of his lessons told us a story about a church that has a sign as you exit saying “you are now entering your mission field”. It reminded me that we all missionaries and that wherever we are is our mission field. I realise that just because I’m no longer in Romania. It does not mean that I cannot still have a positive impact on people’s lives.